Because I'm Disposable by Rosie Somers.

Because I’m Disposable is a YA contemporary by Rosie Somers, out now! 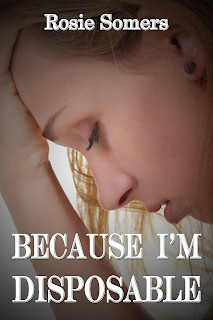 Sixteen-year-old Callista Tanner was in the bathroom slitting her wrists the night her father took a fatal plunge down the stairs. People around her think she attempted suicide because she found him dead -- or worse, because she had a guilty conscience. Few know the truth; Michael Tanner had been beating her for years.

The freedom that should have come with her father's death becomes a cage of rumors and self-doubt. Callie seeks escape in the most destructive ways, bringing her emotional scars to the surface for the world to see.

Lincoln Devaux refuses to let Callie sink fully into the depths of her own depression, stepping into her life when she needs someone the most. She tries to push him away, but Link is determined to save Callie from herself. Even when she doesn't think she's worth saving.

Rosie Somers is a YA author who lives in Florida, soaking up the year-round sunshine. She can often be found in her favorite spot on her favorite beach, nose-deep in a good book.

Rosie is giving away a kindle!!
a Rafflecopter giveaway
Posted by Ana Blaze at 10:00 AM