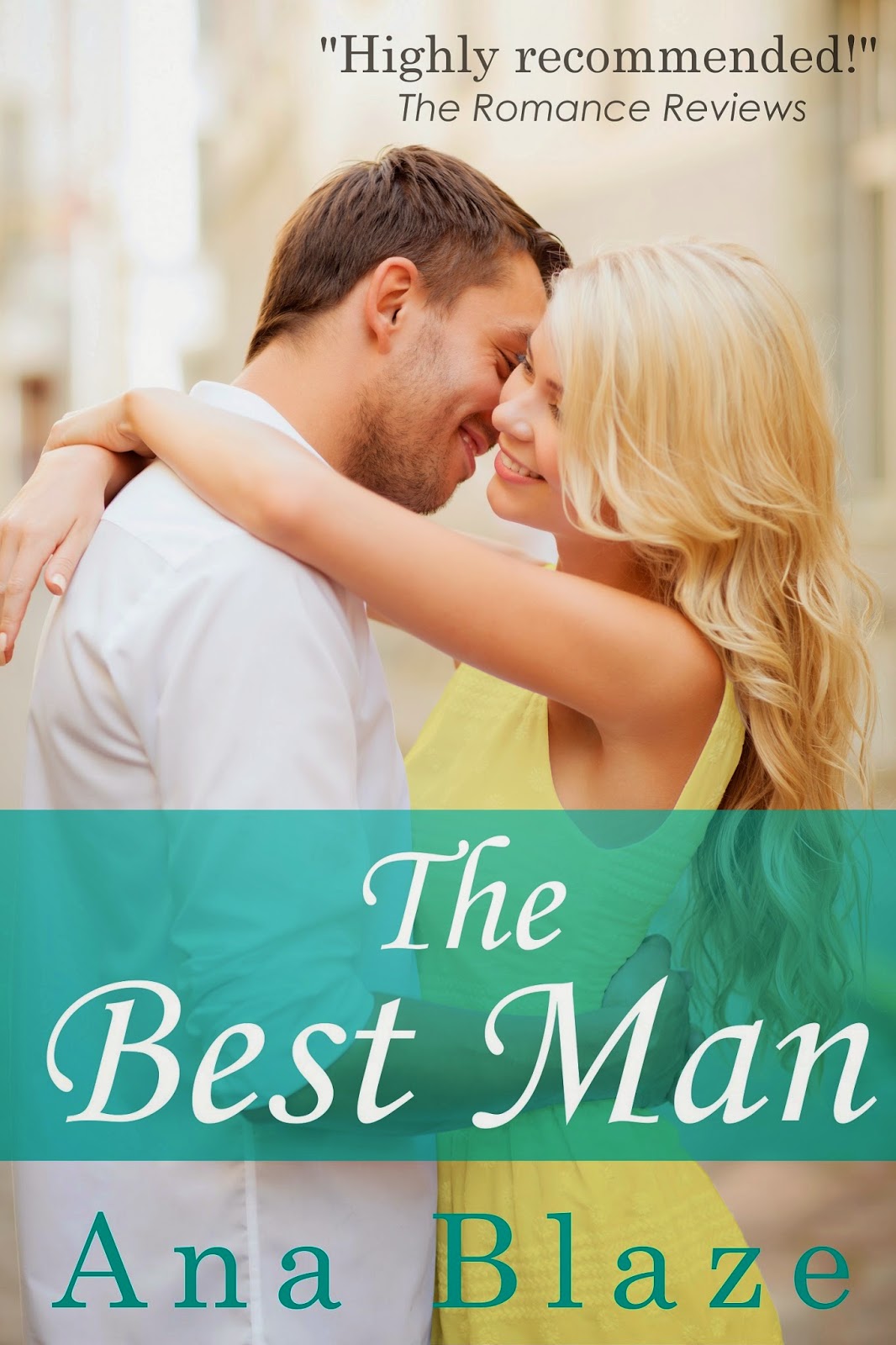 
Beth Chase is too busy planning perfect weddings to worry about the lack of action in her own love life. But if she was looking for a man, she wouldn’t be looking at Colin Pratt. Her boss swears that Best Man Colin is a quiet scholar and science fiction writer who couldn’t possibly cause a fuss at his own brother’s wedding. He’s clearly never met the man in question. Snarky, sexy and more than a little inebriated, Colin is the final obstacle between Beth and the last perfect wedding she needs to make partner. Of course, when she helps him into a taxi at the end of the night she has no idea that he’s only just begun to poke holes in her professional exterior. Colin might have the skills to seduce a romance professional, but can he convince her that he’s the best man to share her happy ever after?


*Recommended by Happy Ever After (USA Today!)


BETH CHASE TOOK A deep breath and blew out, slowly counting to five. All the signs of an imminent disaster were there. That’s why her boss had left it up to her. Eli was no fool; he was making sure that when everything went to shit, he wasn’t around to take the blame. Of course she’d known that when she accepted. The fact was opportunities like this one didn’t come around very often, and nailing this impossible wedding was Beth’s final step up the incredibly long staircase to full partner at Ever After Weddings. It didn’t matter how annoying the bride was or how many times the groom’s mother had a new, last minute idea, Beth was going to smile and give them their perfect day. There were no other options; she was a professional.

She was also pissed.

Beth held her hand out and smiled broadly. “Tony, give me your shirt.”

“What?” Her assistant slumped, but he quickly complied with her request. As he unbuttoned his white dress shirt and passed it to her a small sigh indicated his displeasure, but he kept his complaint to himself.

Beth accepted it and took the incredibly drunk best man by the arm.  “You, come with me.” She struggled to keep the irritation out of her voice as she led the man down the hall. Luckily, she’d kept the jacket to his tux, so he hadn’t ruined it as well.

“Sorry, love. I’ve got a wedding to attend. Another time, maybe.” His British accent surprised her, since his brother spoke with a distinct Irish lilt.

“I know you’re in the wedding, Colin. That’s why we’re going to get you all handsome so you can stand up there with your brother on his big day. You don’t want to let him down, do you?” She tugged him into the bathroom and locked the door behind them. Nervous grooms sometimes got drunk before the ceremony, and Beth had seen a fair number of slightly hung over groomsmen, but finding a best man this wasted before he arrived at the church was a first. It was pathetic, it was selfish, and it was a million other things Beth Chase had no time for.

“Let him …” He laughed hoarsely for a few seconds before ending with a hiccup that sounded like a sob.

“Whoa. It’s okay. We’re going to get you fixed up.”  She gave him a smile as she tugged his wrinkled shirt out of his pants.  “It’s going to be a wonderful wedding.”

“My grandparents were married in this church.”

“Oh? How sweet. Your brother decided to come all this way to get married in the same church.”

He grabbed her arm. “No! Not his mother’s parents. Mine. It’s my bloody wedding. Didn’t anybody tell you?”

Beth stopped for a second. This was a new one. Being in the business for five years, she’d thought she’d seen it all. Clearly, she’d been mistaken. The man in front of her was a mess — worse than drunk. He looked broken. His eyes were bloodshot and she wondered if he’d been crying.  Beth placed her hand on his arm. “Colin, this is your brother’s wedding. Remember? He and Andrea are getting married today.”

“Beth Chase, from Ever After Weddings. I’m here to make sure everything goes smoothly.”  She gave Tony’s shirt a shake and walked around Colin’s back to help him into it.

He laughed. “No worries, Team Evil can keep my fiancée. Not gonna steal her back.”  Colin brushed away her hands and began buttoning the shirt.

“You and Andrea were together?” This was exactly the type of information she needed ahead of time to prepare for this sort of mess.

“That’s what I’ve been saying.” He sighed and gave up on the buttons.

Beth finished the job and helped him with his bow tie. “Tuck in your shirt and now the jacket.” Beth helped Colin into it and studied the results. Better. Still, it appeared that Colin had slept with wet hair — perhaps outside on a bench during a hurricane. On one side, his hair was matted nearly flat, and on the other it stood up straight. She wet her hands at the sink and ran her fingers though his curls.  “Much better. I knew there was a good-looking guy under there somewhere.”

Beth washed her hands before locating the mints and eye drops in her bag. “Just a couple of final touches …” She held out the container of mints. Instead of grabbing one, Colin produced a flask from his pocket.  Beth frowned.

He took a drink and held it out to her.  “Look, it has my initials. He took my girl and my wedding, but he gave me a fancy bottle with my name on it. Quite a deal.” Beth held her hand out for the flask. He pulled it away and gave her a stern look. “You shouldn’t drink before the weddin’, love. It’s naughty.”

Beth’s lips twitched. “In that case, maybe you should just let me hold it until later for you.”

Beth laughed and took her bag back. She slung her tote over her shoulder and used his momentary distraction to claim the flask. “A girl never knows what she might need. I like to be prepared.”

“Prepared for what? Zombie apocalypse?”

“Eat this.” She handed him a mint and smiled as he popped it in to his mouth. “Good. Now, lean back.” She squeezed a drop of Visine into each eye.

He blinked and scowled. “Why are doing this to me?”

“I threw them out with the bathwater.”

He chuckled and pulled a small box out of his pants pocket. “Got the rings right here.” He opened the box and showed her the two diamond-encrusted rings inside. “They’re a bit ostentatious, but you can try them on if you like.” He frowned. “Won’t fit you, though. You’re rather tiny … and bossy. Why are you so bloody bossy?”

Beth closed the box and pushed it towards him. “Put this back in your pocket and don’t take it out until the minister asks.”

“Perfect.” She took his arm and walked him out of the bathroom and over to the chapel. “Now, you just walk up the aisle with the pretty maid of honor and stand next your brother.”

Colin snorted. “Mindy hasn’t been a maid in a long time. Bet I’m the only bloke here she hasn’t shagged.”

Mindy turned to scowl at him. “Thank God Andrea came to her senses and decided to marry a real man.”

Colin chuckled. Beth plastered on a smile. “Okay the music is starting — everyone get in your places.” She tapped the shoulder of a small, dark-haired girl wearing an elaborate and uncomfortable-looking dress. “You’re on, sweetie. Big smile.”  She turned and waved to the next group. “Bridesmaids and groomsmen.”  She bit back a laugh at their dresses and nodded. “You all look lovely,” she lied. Andrea had clearly taken advantage of her ability to make her friends look like crap. “And now the maid of honor and the best man.”

Colin yanked Mindy by the arm. “Come on, trollop of honor.”

“Jackass,” Mindy whispered loudly, before pasting on a toothy smile and marching down the aisle.

Beth watched them for only a second. The potential for trouble from the best man was clear, but she had things under control. She turned to give the bride a big smile. “You look stunning,” she gushed. When everyone was in place, she signaled to the organist to play the march and sent Andrea and her father up the aisle. Then she dialed Eli’s number.

“Hello there,” he answered, “I assume the Pratt Wedding is going splendidly.”

“Whatever do you mean?”

“Eli, I’m in no mood for the games. Tell me what I need to know or I will start sending your assistants to the downtown dry cleaner.”

Eli gasped. “You wouldn’t. They turned my favorite Ralph Lauren jacket a hideous shade of green.”

“Fine. The bride was engaged to the little brother. He brought her home to meet the family and she apparently decided she likes her men a little taller and a lot dumber. She ditched him for the big lug, but no one told him that was why she’d called things off until last week. Oh, and she kept all the wedding reservations she’d made with brother number one to use with brother number two. Vicious, but practical. Someone should give that woman a reality show. … I smell a hit.”

“Why is he standing up as best man?”

“Daddy doesn’t take no for an answer, I guess. I wouldn’t worry about him making a scene though, he’s the quiet type. A writer or a professor maybe … something about Oxford … I don’t remember. The point is: he’s the responsible type, like you.”

“Nope. That’s the whole sordid tale as far as I know. Now stop worrying and go run a wedding so I can get the rave reviews I need to consider your promotion.”

“There’s nothing to consider, Eli. You already agreed to make me a full partner after this wedding.”

“We’ll talk when I hear they got hitched without a hitch. Now, let me get back to my facial.”

Beth hung up and returned to the chapel doorway to watch the ceremony. The bride and groom both liked to hear themselves talk, and had chosen vows that allowed them to indulge that interest. Her gaze wandered back to the best man; she felt bad for him. Colin didn’t belong at this wedding.

He wanted to make a scene. Fair or not, it was her job to stop him.