#FridayFavorites Aromaleigh Cosmetics: This is My Design collection.

So, as discussed in my last post, this will be the first of my new Friday series in which I share something I love with you all. I will be oh-so-cleverly calling these posts my #FridayFavorites series.

Today, I'm going to talk about eye shadow. I'm in my thirties. I'm not feeling any need to be more precise than that since the point is just that I'm an adult and have been for a while. I mention this because I have only recently started figuring out how to use eye shadow. I was in my late teens before any make up-wearing was allowed and, when that time came, no one showed me how to use any of it.

I used foundation to hide acne and lined my eyes with thick black eyeliner and felt pretty glamorous. It was the late nineties and I was wearing a flannel shirt and cargo pants purchased at the army-navy surplus store. Any more make-up would probably have been silly anyway.

My senior year of college I started trying for a more feminine look, but I went to school in rural Vermont; it was all wool sweaters, hiking boots and warm hats.

So I made it to my mid-twenties before I realized that I had no idea what I was doing with most make-up, but eye shadow especially, and have mostly stuck with barely-there nudes ever since. I'd swipe one shade across my entire lid and be done with it.

Only last year, I found this small, I think it's run by one talented woman, company that makes mineral eye shadows. It's called Aromaleigh Cosmetics.  There's tons of gorgeous colors, but the thing that drew me in: she has collections inspired by cool nerdy things like Greek Mythology, the BBC Sherlock series and the television show Hannibal.

Hannibal inspired eye shadow. I needed some. I was just too delighted by the very idea of wearing Hannibal eye shadow to resist. So, I've been learning. I watched those tutorials on Youtube and I have actually purchased make up brushes. It's a work in progress, but a fun one.

So my #FridayFavorite this week is the This is My Design collection from Aromaleigh Cosmetics. 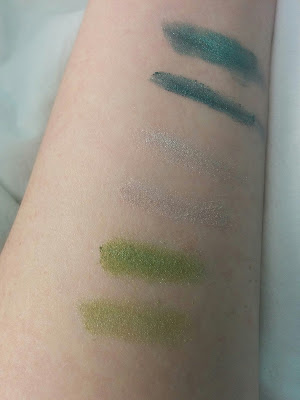 You can use mineral eye shadow dry for a more sheer look or wet for a thicker or more defined look, so I put on three of my favorites wet and then dry. Starting from the top-- wet Sublime, dry Sublime, wet Chrysalis, dry Chrysalis, wet Craquelure, dry Craquelure.

Apologies for the picture quality, but I think you can see that the colors are really rich and beautiful. They are also cruelty-free!! 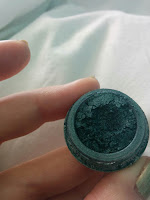 This is Sublime, a color inspired by a dress worn by Alana Bloom, in the little pot it comes in.

While we are on the subject, can I just say that if you haven't checked out Hannibal you are missing out? It's remarkable. The acting, costumes, sets, cinematography and writing are all top-notch. Yes, if you're the type who gets nightmares, this will do it for you. I'm that type, but it is worth it. Check out some reviews on Rotten Tomatoes; Hannibal's Second Season has a perfect 100% fresh score. That's almost impossible.

The third season is currently airing on Saturday evenings and the first two seasons are available on Amazon. They are free to stream if you have Amazon Prime!

It has been officially canceled, but there is still some hope that it will find a new home for new home for a fourth season.

So, do I have any Hannibal fans out there? How about eye shadow? Anybody else still learning how to put on make up?