Woo Hoo! Check out this brand new romance from fellow Entranced Author, Danielle Doolittle. This looks like just the kind of story I like to curl up with. :) 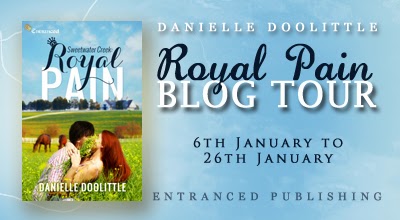 Falling in love can be a royal pain. 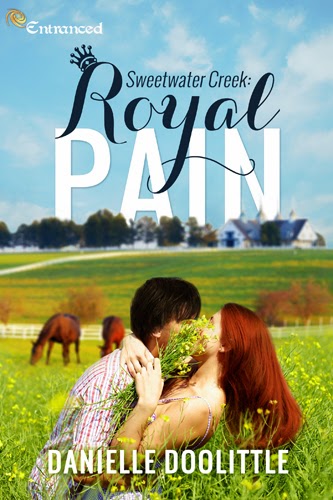 When Carleigh’s life is on the line, will Prince Henry step up to the plate? Or will he prove he really is nothing but a phony royal pain?

You can add Royal Pain to your to-read list on Goodreads:
https://www.goodreads.com/book/show/18723226-royal-pain


About the Author:
With a bachelor’s degree in English, Danielle has always had a passion for the written word. Initially starting out to be a high school teacher, she soon realized writing was her calling. Danielle lives in Ohio with her family. When she’s not writing (which is rare) she’s spending time with her husband, wrangling two rambunctious boys and one rowdy little girl, and baking like she’s on Cupcake Wars.
Danielle enjoys copious amounts of coffee and dark chocolate, chatting on Twitter, and a good love story. Oh, and an Alpha hero is a must!

Check out these tour prizes:
- a grand prize goodie bag including a handmade bookmark, 3 3x4 magnets, a Royal Pain deck of cards and a tote bag.
- 2 e-copies of Royal Pain.

“All rise. The Honorable Judge Freeland presiding.”
The bailiff’s voice caused Henry’s brain to ricochet against his skull. He was slow to gain his feet as an elderly man in a billowing, black robe walked briskly from a doorway set to the side of the room. Henry watched his bald head reflect the light as he took his seat at the bench.
The sooner this little show was over, the sooner he could find his car and get back to Chicago. His brother was expecting him. While he wasn’t looking forward to the idea of dealing with official state business, Henry found he actually missed Alexei. Must have been the hangover.
He hadn’t been home in six months. Not since they’d issued him the ultimatum. It was either change his ways on his own, or his family had resolved they would do it for him. He knew how they wished to solve what they perceived as his problem, so Henry packed up and headed to America. Here, his only official business involved deciding which party to attend and who he was taking back to the hotel with him afterward.
“What have you to say for yourself?” The old judge’s gravelly voice made Henry realize he should have been paying attention.
“Sorry?”
“I said, after your actions last night, what do you have to say for yourself?”
“I can honestly say, sir, that I sorely regret having to take the jobs of all the night staff at the Hilton for allowing me to leave the hotel in such a condition. So if you will let me be on my way, it would seem I have some business to attend to. And I assure you, after today, you will never have to see my face again. Now, if I could be on my way?”
“Hold it right there, son.” Steel had worked its way into Judge Freeland’s voice. “I know who you are, and I believe you expect it will allow you to walk away from this without feeling any repercussions. I’m here to tell you, young man, that in that assumption, you are very wrong.”
Henry felt himself shift under the weight of the old judge’s glare.
“You will find that we treat all offenders equally here in Sweetwater. You have quite a list of offenses: DUI, assaulting an officer, public nudity.”
Public what?
“Now, see here!” Henry was outraged. Who did this backwater, sorry excuse for a judge think he was? Henry was royalty, nobility. Granted, he was currently on the outs with the family, but that didn’t change anything. He was entitled to a standard of treatment, and this old man was about to get a lesson in etiquette.
“Before you can launch into how I have offended your noble lineage, Your Highness, you should know that the District Attorney has been in contact with your embassy in Chicago. The royal family has been made abreast of our office’s suggested sentencing and has fully backed it.”
What? Those nosey diplomats never bothered to stick their noses in his business before. Why start now?
“While I cannot pass a ruling on someone with diplomatic immunity such as you, I do have this message.” Pulling a crisp sheet of paper from the manila folder he had carried into the room, the old man cleared his throat before continuing. “It is the decision of the Kingdom of Benignus that Prince Henry Xavier Bartholomew Reginald Fitzgerald be sentenced to thirty days in supervised detox at Mount Mercy Rehabilitation, followed by six months at Sweetwater Creek Ranch and completion of their sober living program. If he does not comply with our stipulations, steps will be taken to strip him of his immunity, and we will not interfere with any who wish to prosecute him for his transgressions.”
“What?”
“I believe, despite that splitting headache I’m sure you are suffering, you heard me clearly. Thirty days at Mount Mercy, six months at Sweetwater Creek, and completion of the program or jail. Your choice.”