Hi friends! I have a sexy cover reveal for you all today. Check out Homecoming, a M/M romance written by Meredith Daniels and available this spring from Samhain Publishing. 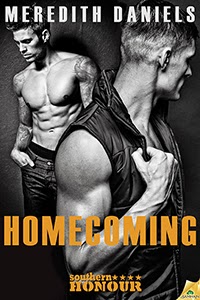 Check it out on Goodreads!

Blurb:   Home is where his heart is…once he recognizes what’s in his heart.

Southern Honor, Book 1
Broken in body, mind and spirit after a botched mission in Kuwait, elite Special Forces operative Jack Dresden returns to Devotion, Georgia, both dreading and longing to face his past. He left town on the receiving end of a wicked right hook thrown by the only person who ever made him feel he was right where he belonged.
Dillon Bluff was never good at pretending. Coming out right after high school, it hasn’t been easy dealing with the stigma of being gay in a small, Southern town. When he stumbles across Jack in the throes of a panic attack, one touch reignites the smoldering, hidden torch he’s always carried for his former best friend.
Jack knows he’s messed up, and the last thing he wants to do is hurt Dillon again. But Dillon is determined to take control and show Jack’s heart the way back home.

Warning: Contains a sexy, scarred Delta Force hero with the hots for his tattooed photojournalist prone-to-skinny-dipping ex-best friend. Threats of creative rope use and plenty of manly loving may leave the reader craving a cigarette—and a man in uniform.

About Author:  Always with a tale to tell, Meredith Daniels has been penning stories since she could put pen to paper. She has always found something magical about the journey of characters finding themselves and finding love worth fighting for. Living in Ohio with her husband and three children, she balances being a mother, wife, dark chocolate and coffee addict, all-round super cupcake baker while sneaking in as much writing time as possible. Meredith loves to hear from readers and you can find her on Twitter at @meredith_d1.

Jack didn’t know what prompted him to reach across the table and take Dillon’s hand in his. It could have been the stark loss he saw in the brown depths of his eyes. More than likely, it was the overpowering need to feel the other man’s skin against his that had assaulted him almost as soon as he’d walked through the diner door.

Countless nights this man had haunted his dreams and countless nights Jack had to force himself to remember Dillon Bluff hated him. Would probably hate him even more if he gave in to the desire thrumming its way through his bloodstream to pull the smaller man over the table and take his mouth in a kiss that would wipe any memory of anyone but himself ever being there.
God, he was losing it. Edna’s return with their lunch gave him the space from his thoughts, he needed to breathe and get his thoughts in order. He tucked into the juicy burger in front of him, determined to ignore the heat still radiating from his palm.
Dillon had made his opinion of him very clear ten years ago. Conveyed rather nicely with his lethal right hook. He had surprised Jack saying he owed him an apology. If anyone needed to say they were sorry, it was Jack. He had led Stacy on for years. Left her thinking they had a future. He had tried to sneak out of town without saying goodbye to the man who made him feel alive. He was chicken shit and he knew it. All he had to do was get through this lunch and the party tomorrow night and he would probably never see Dillon again. Jack had survived the worst kinds of torture. Surely he could keep a handle on his lust for forty-eight hours?
He tried to pay attention to Stacy as she updated him on all the happenings around Devotion. He couldn’t stop himself from looking across the table at Dillon. He fought a smile as he watched the other man mop up burger juices with his fries. He followed the french fry’s journey to lips that had left him a quaking mess ten years ago. When Dillon’s pink tongue peeked out and dabbed at the corner of his mouth, he had to pinch his thigh to hold in the moan of longing.
“So what do you think?” Stacy’s question had him stuttering back to reality. Leaving behind the world where he traced the delicate lines of the colorful tattoos covering Dillon’s arms with sharp nips and soothing kisses.
He tried to hide his scowl at the direction his thoughts had wandered down and turned to the woman next to him. “I’m sorry?”
“I was saying that we need to get together after the party tomorrow.” She winked at him. “How long are you in town?”
“Six weeks.” He tried not to growl the answer but he could feel Dillon watching him. His entire body seemed to be in tune to Dillon’s and that was the last thing he needed. There was no way he was going to make it through another meal with the man without giving the whole restaurant a show he doubted any of them truly wanted to see.
“That settles it then.” Stacy grabbed his arm and squeezed. Across the table, Dillon tensed. “We can’t let you spend the whole time squirreled away in that house.”
“He’s supposed to be recovering, Stacy.” He watched her brows crinkle in confusion before she shot her brother a quick look. Dillon was now studying him like he was assessing his fitness. Like he just remembered that he was here on medical leave and not to stay.
“He looks fit enough to me.”

“That’s because Jack Dresden only lets people see what he wants them to.”
Surprised, Jack held his gaze. What did he mean by that? Did Dillon suspect his feelings for him? It was hard to say because the only thing he found in the other man’s eyes was a banked fire. He wasn’t sure if it was flames of anger or something else.
The rest of their lunch was spent in near silence. Stacy tried a few times to break the two men out of their sulk, but it looked like her brother had said his peace and Jack sure as hell didn’t feel like digging himself any deeper. So Jack inhaled his burger which now held the appeal of cardboard and wondered when he could find a way out of there.
Just as he was about to make an excuse, the bell over the door jingled.