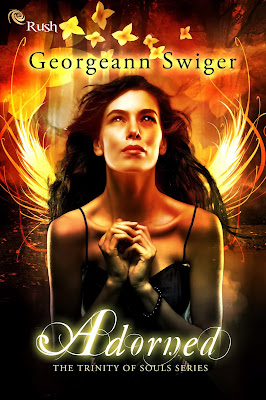 Blurb:
When seventeen-year-old Anya finds out she’s actually an angel being trained to protect humanity, she discovers that becoming an angel has nothing to do with wings and haloes. For Anya, becoming an angel has to do with death—her death.
Micah, the angelic soldier ordered to protect her until she transitions from human to angel, promises her death will be a glorious experience as long as she follows his rules. But getting Anya through this life and to the next isn’t as simple as Micah expects. His job becomes even more difficult after he unwittingly performs a miracle that exposes Anya’s hidden angelic light.
With her secret out, Hell’s legions begin targeting her. Unfortunately, Hell’s minions are the least of Micah’s worries. He’s more concerned about the forbidden human emotions he’s developed toward Anya.  Even more troubling, is she seems to love him too. And giving in to those feelings, could mean dire consequences for them both.

Check out my interview with Georgeann and her giveaway at the bottom of the post!

Micah sits in the chair at the head of the table. He lowers his head and mouths something under his breath before snatching the fork from the table.
“What happened to you?” I ask. “Did you change your mind about running away?”
“I didn’t run away.”
When he lifts meatloaf to his mouth, I pull his plate toward me. “I’m tired of waiting for you to tell me what’s going on.”
He swallows. “I’m from the Triad.”
“Is that a foster home?”
“What’s a foster home?” He tastes his mashed potatoes.. “Aren’t you going to eat anything?”
“I’m not hungry. Just tell me what’s going on.”
After he chugs his iced tea, he gets up and squats in front of me, balancing on his toes. No emotion crosses his face. The odd vibration in the room sends a tremor over my skin. Something’s off.  When Micah finally speaks, his voice is flat and emotionless. “I am an angel of the Lord, and your new guardian, here to escort you into the Kingdom of Heaven.”
I stare at him until the truth dawns on me. Micah’s crazy. How did I not see it to begin with? No sane person would be running around naked in a thunderstorm. That old Simon guy was probably with some mental asylum. He should have put Micah in a straightjacket when he had the chance. Now I’m locked in the dining room with a big strong psycho.
“Aren’t you going to say anything?” The scar in his Micah’s eyebrow deepens when he tilts his head to the side to study me. “When you enter the Kingdom you’ll become an angel.” He seems at ease, like a serial killer waiting to strike. “I intend to make your human death the most wonderful experience of your life.”
“My…human death?” Even though my voice cracks, I manage to force myself to smile. I glance at the locked doors and slowly scoot my chair away from the table.
He touches my knee. “I’m happy to tell you, you won’t be stuck here much longer.”
When I think enough distance is between us, I use all my strength to shove him down and run for the door.
When I look over my shoulder, Micah gets to his feet, glaring at me.
“Stay away from me!” My trembling hand can’t get the key to cooperate. I keep trying to get the key in the lock, but it slips out of my sweaty fingers and drops to the floor. I pound on the door. “Aunt Celeste!” I scream.
When I look back, Micah sits at the table, flicking his finger on the butter knife, making it spin it like an airplane propeller. His lips form a tight line. He slams his hand on the table, causing the butter knife to fall to the floor. “Sit. Down. Anya.”
“Aunt Celeste, help me!” 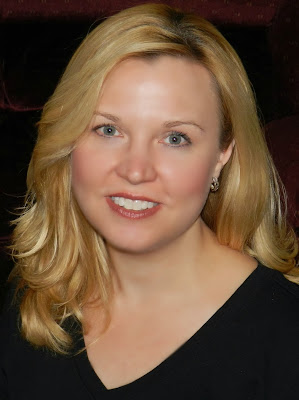 About the Author
Georgeann Swiger earned her degree in journalism from West Virginia University, and then spent five years as an anchor/reporter at WBOY-TV in Clarksburg, WV.  After having children, she left television news to be a stay at home mom. During that time, she discovered creative writing was more fun than writing about real life tragedy.  Imagining interesting characters and having them come to life on the page is now her passion. When she’s not writing, she works as a substitute teacher.  She lives in Reedsville, West Virginia with her husband, two kids, a beagle dog and a temperamental cat who tries to rule the house.

Georgeann stopped by to answer a few questions!!!

Do you have any advice for aspiring writers? Is there anything you wish someone had told you?

I wish someone had explained to me the amount of time and energy needed to market a book.  I naively assumed once the book was released my job was pretty much done. It’s not! Blog tours, giveaways, and the search for book reviewers are all things I never anticipated having to invest so much time and creative energy. My advice to new authors would be to start working on the details of promoting your book while you’re editing. Get organized and plan.

Concerts can be very expensive, who do you think is worth the splurge? 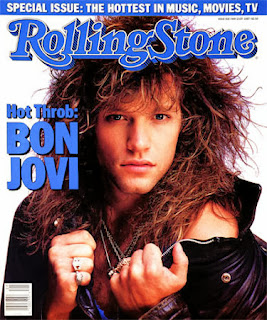 Back in the 80s, I was lucky enough to see Bon Jovi in concert. Those were the days when Jon had big hair and was every girl’s dream. To this day, I would shell out big bucks to see Jon Bon Jovi on stage. Twenty-five years later, he’s still my idol.


How do you choose your character names?

I’m always looking and listening for names of potential characters. I use online name sites but I’ve also been inspired by obituaries, names in the telephone book and even names on tombstones.
Because I like symbolism, I try to come up with a symbolic name that gives the character deeper meaning. I got the name Micah off a website about angels. Micah is the Angel of the Divine Plan, which is fitting because Adorned deals with angels who determine destiny. The name Anya just came to me. When I looked it up, I discovered it’s a variant of Anna, which means favor or grace. So, it was perfect.

My perfect day is the kind of day when the words flow effortlessly. On the rare occasion I fall into one of those days, I do everything in my power to take advantage of it. I ignore the phone, forget about fixing dinner and plant my butt in the chair, then let it happen. I’ve gotten some of my best stuff that way. Unfortunately, there’s no forcing the magic and I never know when it’s going to hit me, but I love it when it does.

Please share a favorite line from your newest book.

A lot of the dialogue in Adorned comes from the characters, not me. There are times when I feel as though the characters are talking to me and I end up writing what they say. The angel Eli gave me some of the best lines. When Anya suggests that he go to a costume party wearing wings and a halo, he blurts out, “I ain’t dressing up like no bird.” When those seven words came out of his mouth, I knew the angels in Adorned didn’t have wings because Eli just told me.  And thank God he did or I might have ended up with characters that look like this. 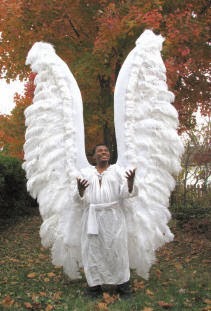 Giveaway code: a Rafflecopter giveaway
Posted by Ana Blaze at 9:42 AM