Bite of the Recluse by Azalea Moone & Anais Morgan. 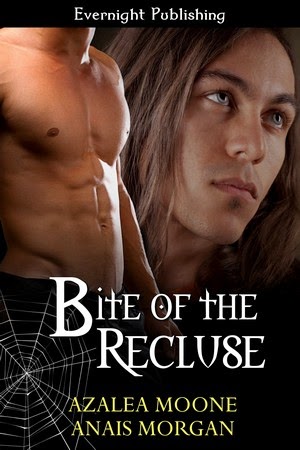 Two years ago while Tristan and his boyfriend were enjoying some privacy, a recluse demon attacked them and his lover paid the ultimate price. Since that day, Tristan has dedicated himself to finding the demon. After all, an eye for an eye. All evidence points to a recluse named Damon.

Like all spider demons Damon knows about Tristan’s mission and is forced to stay on the move. But fate has a wicked sense of humor and they must team up to fight the real killer. But when she's closer than Tristan expected, his and Damon's relationship is tested before it can begin.

He placed his hands on his hips. “I need to see. I need all the pieces of the puzzle.”

Kill me now, God. “I have a sore spot. It started hurting shortly after Marcus died. I’ve always meant to go to the doctor, but looking for Marcus’ killer became priority.”

Please God, kill me now. Not only did I not want to drop trou, but in front of a demon? More importantly, in front of Damon, and those magnificent eyes, gorgeous body, and desirable lips? How in Jesus’ name I became attracted to him blew my mind. For that matter, when? Completely out of left field. It hit me suddenly. We were driving, talking, at the mountain, and suddenly I felt it. A passion I’d forsaken years ago. Yet, here I was, my cheeks reddening. Fuck it. I sighed, stood up and began unbuckling my belt. I slid my pants down.

Damon backed up a few feet. “Umm, what are you doing?”

“The bite is on my thigh.” I lifted my boxers to just the bottom of my butt cheek. “My upper thigh.”

Damon gazed over me skeptically before kneeling down in front of me. I felt his warm fingertips touch my skin. To my surprise, I had to do everything in my power to stop from shivering. The way his touch felt, his fingers dancing over that sensitive spot… It normally hurt, but Damon was so gentle with me that it caused a different reaction. A different, dangerous reaction.

I glanced behind me. Damon looked up, his gorgeous silvery eyes gleaming with…lust? No, that couldn’t be it. But I thought it was. I drank in his gaze, the power behind those eyes. I had the urge to push him on the bed and allow our feet to entwine as we spent hours in bed together. Instead I pulled up my pants. Much smarter move.

He stared at me, a look of confusion crossing his face before he smiled and moved back to his seat. “Definitely recluse. I’d say my sister bit you.”

My skin burned from his touch. I wanted to, desired more than anything, to ask him to touch me again. I peered at him from below my lashes. He was doing the same. Fuck it. I rushed over to his chair and placed my lips upon his, claiming his mouth. The way he slipped his tongue past the barrier made my cock harden. I did the same, and our tongues danced with one another’s. He was warm, inviting, and didn’t hold back. My breath became harsh as I stilled, afraid of what I had just done.

I quickly pulled away and ran for the bathroom. Once inside I closed the door and pressed my body against it, hoping that if Damon came knocking, he couldn’t get in.

I knew I stunk. Plus I had a massive erection in my jeans. I turned on the water of the shower and got it to a nice temperature. After undressing, I stepped beneath the spray.
A Quickie Interview with the Characters

Favorite sex position?
Damon: I suppose it would be called missionary. Or some position where we’re facing each other.
Tristan: Missionary. Damon has the best come face.
Least favorite sex position but you still do?
Damon: Doggy, from behind, whatever you humans call it. I like to see the look on Tristan’s face when he’s fucking me. Unless he’s forcing me against a wall, or I have a blindfold on. I love it when he’s dominant with me.
Tristan: Over the shoulders. I don’t care who can do what, I cannot contort enough for that shit.
Favorite sex toy?
Damon: Anything that restricts movement. Cuffs, ropes, etc. and a blindfold.
Tristan: Paddle. I love the sound an ass makes when it gets smacked.
Sex toy you’d like to try?
Damon: This is another of my little secrets, since Tristan and I don’t practice hard BDSM, but I’m really interested in a cock and ball harness. Shhh... Maybe one day I’ll get the courage to ask.
Tristan: Ben Wa balls. I want to see Damon squirm while I cut open a demon’s throat.
If you could change one thing about the other, what would it be?
Damon: His overall attitude against all demons. I know he spent years killing demons in search for me, but now that’s he’s found me, his attitude with demons hasn’t improved much. There are good demons, well as good as a demon can get. But for him, they’re all evil. Sometimes I wonder if he still feels that way about me.
Tristan: His views on humans. He thinks all humans are beautiful. All creatures, in fact. He doesn’t understand that most want to hurt or kill you. Damon has too much of a trusting nature.
Posted by Ana Blaze at 8:00 AM