I was recently nominated for the Beautiful Blogger award by the fabulous Molly Ann Wishlade. Isn't she sweet? You need to go check out her blog here: http://misswishlade.wordpress.com/ 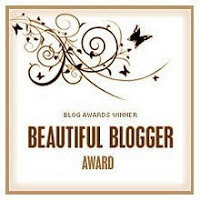 The Rules:
1. Copy and place the Beautiful Blogger Award in your post.
2. Thank the person that nominated you and link back to their blog.
3. Tell 7 things about yourself.
4. Nominate 7 fellow Bloggers, tell them by posting a comment on their Blog.

Now I am meant to dazzle you with seven interesting facts about me. Wish me luck.:)

Okay, there you have it: seven maybe vaguely interesting tidbits.

Now comes the fun part, my seven awesome nominations are: