Romance In The Rain

To celebrate the release of the Romance in the Rain anthology, author Claire Tisdale stopped by my blog to share her favorite romantic movies. She has some lovely picks.

1.      Notting Hill — For its pairing of Hugh Grant—the quintessential dithering Englishman who’d be a complete dork if he weren’t so handsome—and All-American Julia Roberts—she of the huge smile, big hair and exuberant nature. Together, the two form an intercontinental alliance that contains the best of both worlds.
2.      Titanic —  Winslet and DiCaprio are the Romeo and Juliet of the 20th century, only it’s a boat, not a family feud, that sinks the ill-fated couple.
3.      The Princess Bride — A sweet and funny movie. Robin Wright is so pretty, her prince so charming, the villains so goofily evil. What’s not to love?
4.      Parenthood — I have a soft spot for Keanu Reeves. He does hapless, befuddled and cheek-pinchingly cute so well. In this Steve Martin flick, directed by Ron Howard, he is the motorcycle-riding boyfriend of Martin’s rebellious teenage daughter (played by Martha Plimpton).
5.      The English Patient — Set in a crumbling Italian villa during the end days of WWII, a burn victim tells his story of passionate, doomed love to the nurse who cares for him.  Haunting, tragic and beautifully filmed.
6.      When Harry Met Sally — To me, Ryan represents the epitome of the rom-com heroine.  I wish someone had given her a youth serum at 30 so she could keep playing variations on this perky, funny young character forever. And Nora Ephron, who wrote the script, was an immensely talented writer and humorist. In the words of Ryan, “Nora was an era. We pictured ourselves inside her dreams and they became ours.”
7.      Grease — A Glee for the Gen-X crowd, Grease has visual pop, a fantastic soundtrack, and eye-candy leads in Olivia Newton-John and John Travolta.
8.      Dirty Dancing —“Nobody puts Baby in a corner.” And nobody who has seen Dirty Dancing can forget this film of forbidden teenage love, sultry dance moves, and fabulous songs.
9.      Walk The Line — The story of Johnny Cash’s life and the pivotal role his wife, June, played in his development as a musician and his recovery from alcoholism. Poignant and heartwarming.
10.  Casablanca — Bogey, Bergman, the war, the den of spies, collaborators, allies and refugees that convene in a little bar in Morocco… a perfect confluence of factors go into making this my favorite movie ever. 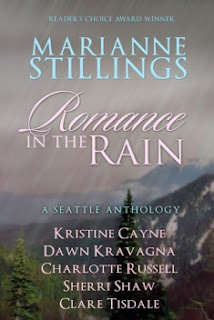 Blurb:
From the pioneer days of Seattle through the smoke-filled clouds of WWII and into the present, Romance in The Rain takes readers on a journey with four generations of the strong-willed and passionate Caldwell family. The anthology of six novellas is a collaboration of the Seattle-based Rainy Day Writers group.
Splendor in the Moss by Charlotte Russell—By the spring of 1853 Englishman James Caldwell has traveled thousands of miles in a quest to find a place to call home. Newly settled Seattle isn’t that place and he’s ready to move on again when widowed Mattie Jensen marches into his life as somber as a cloudy day. But James can see through the solemn haze to Mattie’s strength and passion. Now he has a reason to stay, if he can just convince Mattie to take a second chance on love—and him. (22,000 words)

Final Approach by Marianne Stillings—With the world at war, Women's Auxiliary Ferrying Service pilot Lt. Charlene (Charlie) Thompson faces personal battles as well. Pearl Harbor left her a widowed bride, certain love would never come again – but battle-scarred Capt. Joe Caldwell has other ideas for the beautiful lady flyer, if he can just keep her safe from the secret saboteur who's already taken the life of Charlie's best friend. (17,000 words)

Love Phantom by Dawn Kravagna—University of Washington, 1983: A great place to get an education and meet single men. Drama major Kara Caldwell prefers to hide behind the characters in her plays, yet feels pressure to live up to the example set by her brave and witty grandmother, a veteran of WWII. Can she learn to overcome her reticence and prejudices to discover which guy truly cares for her--and who is just putting on an act? (17,000 words)

Shelter from the Storm by Clare Tisdale—Seven years and one broken heart later, JD Caldwell returns to Seattle to pick up the pieces of his old life, never imagining he will fall for Maya—the mysterious woman who lets him into her house and bed but keeps the door to her heart tightly closed. When their summer fling takes an unexpectedly serious turn and Maya gives him his walking papers, JD has to decide whether their love—and his legacy—is worth fighting for. (21,000 words)

Aftershocks by Kristine Cayne—When Seattle is struck by a devastating earthquake, technical rescue firefighter Jamie Caldwell must save his estranged wife and daughter from the wreckage of a collapsed building. He's defied the odds hundreds of times, but will his luck finally run out for good? (24, 000 words)

Writing fiction is difficult and lonely and more often than not, the "normal" people in your life don't understand the writing process and can't fathom why you are possessed and obsessed with finding the perfect word or phrase that says exactly what you want to say right where you want to say it. Only other writers comprehend and accept that kind of torment.

To fill this need to surround herself with like-minded obsessive-compulsive self-doubting lunatics, in 2005, Marianne Stillings, who writes Romantic Suspense, established what came to be known as The Rainy Day Writers.

There were only two requirements for joining the group: You must be serious about writing and getting published, and any criticisms of co-members' work be honest, gentle, and kind.
Over the years, the membership has changed; some people moved on, others joined. The group we have now has been stable and constant since 2009. The Rainy Day Writers are a family.

Charlotte Russell joined the group in 2006 at the suggestion of a former member. Charlotte writes Historical Romance.

Dawn Kravagna became a member in the spring of 2007 because of a writers' list where Marianne had posted looking for new members. Dawn writes Comedy and Mystery.

In the Autumn of 2007, Sherri Shaw found her way to the group because she and Marianne happened to sit at the same table at the Emerald City Writer's Conference that year. Sherri writes Historical Romance and Paranormal Historical Romance.

Kristine Cayne found the group in 2009 because she won Marianne's raffle basket at the Emerald City Writer's Conference that year. The basket included an offer to critique the winner's manuscript—an evaluation that resulted in an invitation to join. Kristine writes Romantic Suspense.

For more information on Romance in the Rain and the Rainy Day Writers, visit them at www.seattlerainydaywriters.com

Romance in the Rain Excerpts

Splendor in the Moss by Charlotte Russell
After telling the dog to stay, he steered her away from the Jensens’ cabin, towards the woods to the south. “Thank you.”
“For what?”
“Giving me the time of day. You were gone for such a long while, I wasn’t certain you’d come back.”
“I had to fight my better judgment.”
James laughed. He couldn’t put on airs around Mattie if he tried.

Final Approach by Marianne Stillings
With the world at war, Women's Auxiliary Ferrying Service pilot Lt. Charlene (Charlie) Thompson faces personal battles as well. Pearl Harbor left her a widowed bride, certain love would never come again – but battle-scarred Capt. Joe Caldwell has other ideas for the beautiful lady flyer, if he can just keep her safe from the secret saboteur who's already taken the life of Charlie's best friend. (17,000 words)

What’s Wrong with Mr. Perfect? by Sherri Shaw
"Somehow I can’t picture you as a nerd.” You’re too perfect, Ivy silently added, fingering the amulet at her throat.  It hummed under her fingertips as the vendor’s words skated across her mind: If you truly want to find the perfect man, and restore your faith in true love, then this necklace will be your good luck talisman.” She dropped her hand, shaking off the crazy notion. It was merely a coincidence that she wished to meet the man of her dreams and Sam showed up. The necklace had nothing to do with it. Right?"

Shelter from the Storm by Clare Tisdale
A shadow crossed the window, and JD looked up in time to see a seagull fly by. Beyond the downtown high rises,  the waters of the Puget Sound lay brooding, glazed by morning mist. Much as JD hated starting over again, he realized that if he had to, he'd rather do it here than anywhere else. Seattle was his home; he belonged here.  Maya and her beach house had helped confirm that for him.

Aftershocks by Kristine Cayne
Adrenaline surging through her system, Erica hung onto the doorjamb as the quake rocked the old courthouse. The building swayed and groaned, windows rattled and shattered as the earth continued to tremble. Cracks raced across the ceiling and plaster dust showered down, covering everything in a thin white film. She’d lived in Seattle all her life but had never experienced a quake as powerful as this one.
And her daughter was all alone.

All giveaway ends November 22, 2012 at midnight. Make sure to only enter the giveaway you are eligible for.

Giveaway for US residents only.
Grand Prize:

Giveaway for both US and International residents.
Prize #1:

Prize #11 US and International Giveaway

a Rafflecopter giveaway
Posted by Ana Blaze at 9:13 PM