My husband read the last post. He wants me to clarify that the dating of lots of guys part of my life is long over. (My mother wants to add that it wasn't that many guys ;))

The hubby and I just celebrated our fifth anniversary two weeks ago. (We have a super geeky tradition for celebrating our anniversary that I'll tell you about another time.) He is wonderful and charming and he can hand draw a remarkably accurate map of The United States of America including state borders and stars for the capital cities in about two minutes. Yup, it's like a superpower. Also, he believes in me.

We met in high school. He was in the grade ahead of mine, but I remember knowing who he was. The day we met,  he was sitting in the library reading a Star Trek novel. A Next Generation Star Trek novel to be precise. I walked up to him, and without any introduction at all, announced that "Captain Kirk was cooler than Captain Picard". While he gaped at me in bewilderment, I further stated "he could beat up Picard and steal his woman."I'm fairly certain that my future hubby disagreed with that statement or at least with the underlying assumption that brute strength and success with women were the standards with which to judge starship captains. But faced with the peculiarity of a ballsy teenage girl who clearly watched Star Trek, he basically just stared. I grinned triumphantly and walked away.

We were friends for a year before I found out that he was funny.

It was probably another couple of months before I realized that underneath the too short jeans and the world's worst glasses was cute guy.

It was still another nine years before we decided to try dating each other. It took one kiss. One kiss and he went from being my friend to the love of my life. 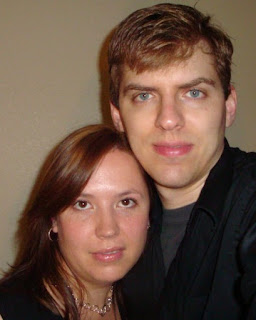